I’m impressed with the quality and design. It is larger than I anticipated. It’s really nice and my cat seems to like it. I am grateful for the replacement liners however they are extremely expensive for what they are (tarpaulin, fabric and metal wiring).

Additionally, shipping is obscene. I ordered 2 sets of liners and was charged twice for shipping even though they were shipped together. I liked the first one I bought so much that I bought another!

I LOVE THE LINERS. THEY MAKE CHANGING OUT THE LITTER EASY, LEAVING A REALLY CLEAN BOX UNDERNEATH. Who knew I could live with finding kitty litter all over my house !?!? My kitties love the new box. The litter stays in the box and the liner is very helpful too. It was a good purchase. No regrets ! 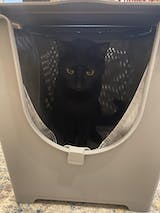 A
Flip Litter Box Alicia M.
Great Aside from a Few Minor Things

The design is great and my cat actually used it right away which was amazing for such a picky cat who is also a side pee-er (the reason I needed this box so badly).

The reason I've left off a star is for a few reasons:

1. The actual base of the box is too small. For $100 I would expect a few more inches than a regular litterbox without having to spend another $100 to upgrade to the XL version.

2. The magnetic lid doesn't line up properly once litter is actually in the box. It's crooked and the magnets aren't strong enough to compensate.

3. The splash guard on the lid really should be the entire perimeter and not just the back half. I get that would make the folding aspect more difficult but my cat pees the ENTIRE perimeter of the box so she needs the splash guards.

Otherwise I do highly recommend this box. I would've sprung for the XL but I couldn't chance spending $200 on a box for a picky cat, especially when she would never use a top-entry box which is most of the point of the larger one. I might spring for it during the next sale just so she can have a larger box for times when I'm gone for a day or two. It looks nice (for cardboard) and the cat loves this thing. It's sturdy. I hope it holds up for a good while despite heavy use. Hands down best money I've spent for my kitties in a long time. The price was scary in the beginning but as soon as it arrived, and we put it together our life has simplified. My male kitty nis a high sprayer and this litter box is so tall even he can't pee over the edge. Thank you, Baby Jesus!!! It's also pretty to look at, love the scoop it comes with, and the cover works great. And the fact that it comes with an interactive toy lol my kitties spend hours in a day playing with that white ball...lol they loved it! It was also packed with a lot of care

The only two things and they are so small is the felt leg came off quite quickly and if your kitties' nails are no trimmed, they do get stuck on the liner. Honestly though we just glued the foot back on and trimmed our kitties' nails. All problems solved. This is hands down the best litter box I have ever used and will recommend it to everyone. Wish it was cheaper, but I will start a piggy bank for all my Modcat needs. ;O)

Thank you Modcat and my kitties' Gypsy Rose & One-Eyed-Willie thank you as well! I have written to the company, they have not bothered to respond. You can buy items cheaper at Amazon plus the shipping is cheaper also. The litter liners are fine for what they are. I am very disappointed with Modkat’s customer service! This is the best litter keeper around. Best of all I love that it can use standard plastic grocery bags. I love that I can reuse these so they don’t only get one use. My only complaint is the top design where you drop in the used litter. The opening is barely wide enough for the scoop which makes it awkward to push down unless you go in at the perfect angle. This then leads to litter building up around the top rim. To make it perfect, make the top a bit wider with slightly taller ridges so it’s easier to push down from all angles with the scoop and make the rim around the outside sloped so that the litter that builds up around the outside falls in when the litter door is pushed in. Hey Jeff, Thanks so much for your review! Your feedback means the world to us and we will share it with our design team.

I love these litter boxes! I bought this to settle a litter box turf war between my two cats who both sling litter and “aim high.” It worked so well I bought another. I hope to get both kitties to use the top exit.

The Modkat litter box looks much nicer than the average litter box, and the hinged top makes it easy to scoop. My cats took to it right away.

These liners fit perfectly and give the cats all the room that need to turn around. This is my second modkat litter box and they are great! They are so much more attractive than any other brand out there. This litter box literally changed my life. My cat is diabetic and her urine is sticky and had to be scraped off the bottom of the litter box. I did this twice a day, usually on my knees! I can’t believe how easy it is to use this box with the (washable) liner!

The cost of the item and shipping are high, otherwise I would give 5 stars. But a lot of thought went into it, definitely. I've gone through so many litterbox solutions for my messy cats and sneaky dogs. This one appears to be working so far. I'm also happy it can convert to a front entry for when my kittens come home soon; and the reusable lining. It's worth mentioning that my cats really loved that one of the parts boxes turns into a toy, what a cool surprise. Hi ModKat! Luna is enjoying her new flip top Litter Box - she did not hesitate to hop in and try to fling litter around to no avail. :-). The litter waste can I also purchased is great BUT the pan at the top is too flat and catches used litter around the flipper at the center. The shovel fits but litter falls to the rim and has to be shaken or pushed into the can. The pan needs to be designed with the hole at a steeper angle. I really hate it - am thinking of going back to waste bags or finding a narrower shovel (hoping that may work). Thanks for asking! Please, please test the waste can and fix. Kristin

K
Modkat Litter Box Karen K.
No One But Your Cat Will Know 🤔

I love cats but hate litter boxes. But not this one. It is so well designed, you will forget you have a litter box. And the litter stays in the box. Thanks Modkat.